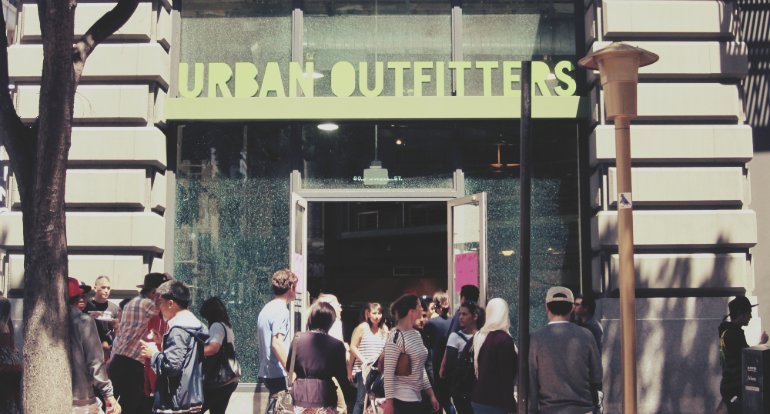 Urban Outfitters is not a Record Store

A claim by trendy retailer Urban Outfitters, supposedly the new global leader in vinyl sales, spawned a media storm that erupted into discussions about the finer points of Mom and Pop record stores, why buying from a conglomerate is bad and generally slamming Calvin Hollinger for driving more nails into the coffins of independent record stores already suffering dramatically in the face of convenience buying. But why? Because Urban Outfitters isn’t a record store first and foremost.

Urban Outfitters capitalizes on the continued fetishisation of making old things new again. Every Holga and Diana camera, all those kitschy faux-vintage tees artificially distressed for age and the veritable library of books and knick knacks designed to match a corporate style readily exportable into everyone’s living room for a price. That price is homogeny because only so many people can buy the same thing before the diversity of individuality evaporates.

Just before dropping the news of being top dog, Hollinger said that, “music is very, very important to the Urban customer…” which isn’t surprising at all. Businesses gather intelligence about consumers to formulate a brand image supported by the merchandise or services offered. Urban Outfitters consistently manufactures storefronts and retail spaces that people want to replicate because it’s trendy and on-point. I’m not above admitting that the talent behind their visual merchandizing and store design team know exactly what they’re doing and I like it on occasion. I won’t pay for that. After I’m done looking through the vinyl – right before I question what I’m doing in an Urban Outfitters anyway – I wander over and browse through the pages of books like The Underachievers Manifesto, which really makes me question how I’m spending my time.

Yes, I’ve bought a record from Urban Outfitters before. I bought it because it was an exclusive, limited edition re-release of a record I’d previously purchased; a record I love and I bought for its collectable value to me. I struggled with the experience at first, and it didn’t help watching the cashier fumble around with the jacket revealing an unfamiliarity with vinyl. A level of product knowledge is crucial for sales, and you can’t really expect much from a college student working a retail gig in between binge-drinking and cramming for exams. I felt a little dirty afterword. Dirty because I had succumbed to what I’m hardline against – buying records from retailers who are not primarily music stores.

Richard Laing, Director of Sales for Sub Pop Records, is quoted in an article from 2013 in the Village Voice that attempts to defend Urban Outfitters by claiming Manhattan had a shortage of stores that carry new records:

“…aside from Other Music, Generation, and a few smaller stores, there’s not many places to buy new vinyl.”

According to Vinyl Hub, that shortage seems to be artificial, unless growth in vinyl sales allowed 14 stores in and around Lower Manhattan to materialize in the last year.

It’s notable that the profile of consumers responsible for the Urban Outfitters dilemma is the generation that never really had a first-hand connection with turntables or a record before they arrived back in the spotlight recently. Music to them, for the most part, is and always has been consumed electronically via download, iPod or streaming media. Maybe the only problem with vinyl sales is really based in the lack of appreciation of a once dominant media form as more than just a commodity steeped in fashion and style. Who’s fault is it that younger consumers don’t know what a 78 is, call a stack of records “vinyls” and wouldn’t know how to setup a turntable without a YouTube video? Technology has moved past analog and so has society – mostly.

Retailers love exploiting a trend until it becomes so over-commercialized that everyone can’t wait for it to end – keep calm and carry on anyone? Buying records from Urban Outfitters is only the beginning; they’re coming soon to big box stores like Target, Walmart and even Whole Foods.

Buying records and grocery shopping just don’t mix. How far can we remove, or add, records into stores other than record stores before there really aren’t any independent record stores left?

Everyone says it’s hard to appreciate something until it’s gone. According to some people, it already is. In Phoenix, at least, we still have options. Check them out.