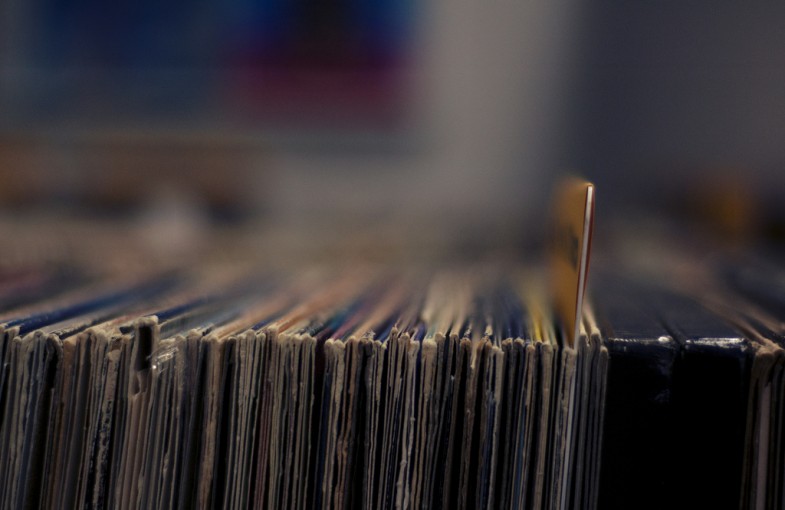 Judging by the Cover

No matter how you become interested in records, learning to visually evaluate one is your first tool to becoming a better collector. A portion of any album’s value is related directly to its condition. Imagine every album recorded by The Beatles. Now focus on a single album, like Abbey Road. Currently, there are 180 unique versions of this album registered in the Discogs database. Not all of those are records, but when you do buy your first copy of Abbey Road, how will you know which version you have and the playback quality to expect from a visual inspection?

The Beatles’ Abbey Road is a best/worst case scenario for learning about vinyl. The variety of pressings means lots of differences between each version, and thats the heart of collectability. Classic rock albums from artists like The Beatles create this kind of diversity at a cost. Learning all the subtle differences between pressings that make one version preferred or more collectible than the next takes time, with some collectors exclusively focusing their interests on a single band or genre.

None of this matters if you’re only after a copy that will play without much noise and let you enjoy the music. It only matters if you’re interested in becoming equipped to get the best quality for your money. Since most retailers don’t offer a listening station for previewing playback quality, visual grading is the de facto standard for quickly evaluating condition and assigning a normalized rating to any album.

Records are not as fragile as they appear; they’re simply not cared for properly most of the time. There is no reason that a record you purchase new should deteriorate to a point of being unenjoyable unless it is not maintained well or damaged by lousy equipment.

Judging anything by its cover might not be the best idea, but record jackets don’t normally lie. If you pick something up that looks like it was drowned in a mud puddle, the chances of the contents being in any better condition are slim. So take the jacket as the first impression; if it looks new and feels new, odds are it’ll be in good shape.

New-old stock, records that managed to make it for years or decades unopened, are an exception to this rule. Could be good, could be bad. Original packaging only indicates a record is new; not that it’s in good condition.

Signs of light wear to outer jackets takes a number of faces from ring wear to cut outs. Stored improperly, records often begin to leave an impression into the structure of the outer jacket; this is ring wear. Dings or slight folds to corners and edges are common. Yellowing or discoloration of labels – especially white labels and jackets – is also very common and is due to the paper yellowing over time, cigarette smoke and sometimes mold or mildew. Cut outs, punch holes and missing corners are all retailer or manufacturer markings indicating a surplus or sale on albums at the time of production. These will look exactly as they sound: 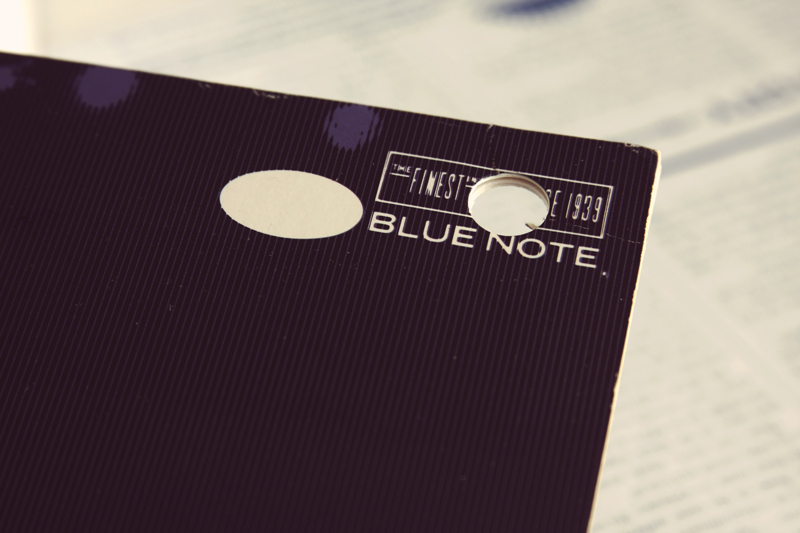 This Blue Note title probably was overstock at some point.

As people transitioned from LP’s to CD’s, records found themselves boxed up and forgotten about in basements around the world where their care was of no concern. Floods, rats, roaches and other pests rendered most of these albums worthless. Water damage is a concern of varying degree as occasionally it only affects the jacket and not the wax. However, when jackets are saturated with a liquid and left to sit, the fibers of the paper begin to weaken and the structure of the jacket will break down until it is in direct contact with the surface of the wax. The longer this direct contact occurs, the greater the chances of permanent damage. Depending on conditions, water will lead to mold and mildew, which also leaves an unpleasant smell on anything it encounters.

Check your records for warps before you buy them. Warps can be slight and difficult to see, or readily noticeable. There’s no good rule of thumb for warps, some will play, some will not; live and learn.

Record flatteners can be purchased and some retailers will attempt to remove a warp from a record for you. Reverting back to a completly flat profile is unusual, and even after several passes through these machines, a record often maintains a certain degree of warp. Training your eyes to look at a records profile – from the side with the record at eye level – can help you quickly identify warps.

Take it as a blessing every time you find a record without a single sleeve scuff. Playback is generally not affected by scuffs, but over time, the more scuffs, the more surface noise you’ll notice during playback. The best way to avoid scuffing your wax is through proper storage and not dropping a record into inner sleeves. Records should always be slid gently into and out of inner sleeves. To ensure the best level of care, use non-paper inner sleeves, as paper sleeves – though cheaper – are a primary scuff culprit.

Perfect records are far and few between, but the imperfections are not necessarily going to impact playback quality all of the time. Damage, aside from scuffs, begins with small nicks to the surface of the wax. Basically, this looks like a smallish divot somewhere on the surface of the record or along the edge. It shouldn’t be terribly noticeable during playback aside from a brief pop or skip.

Scratches resemble a line or toddler-like scribble. This type of damage may or may not adversely affect playback. Symptoms most often associated with scratches are repetitive pops or skips for a longer period of time dependent on the size of the area damaged.

Gouges are serious. You can see significant damage to the surface of the record, deeper than your fingernail. It’s safe to say you won’t be enjoying any section of a record marked by a gouge. Unless you really want it, or it’s stupid rare, save your dollars because this purchase doesn’t make sense. 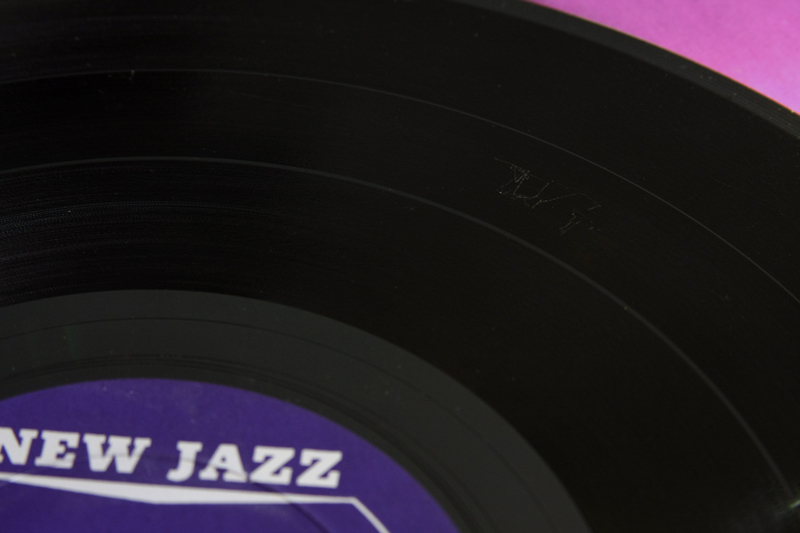 A deep scratch that will effect playback quality. 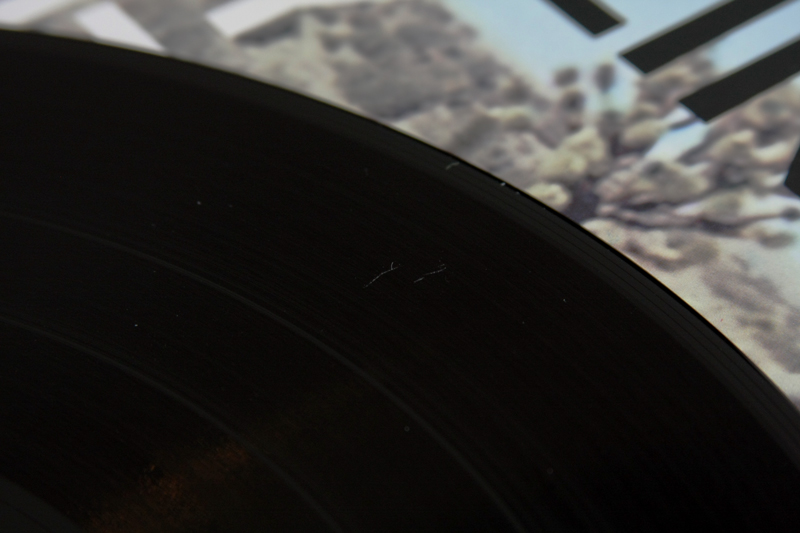 This record was purchased new. Those two scratches are factory or mishandling defects.

The perfect record is the one you listen to often, not the one that sits on the shelf unplayed. Sometimes it takes a long time to find it, but in between, you don’t have to pass up a copy of lesser quality. Enjoy what’s available and upgrade when a better copy comes around.