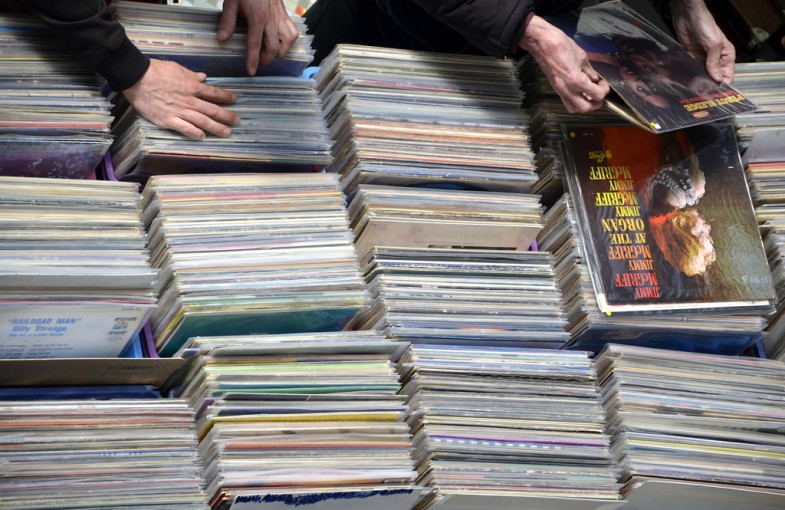 Record swaps are like highly specialized flea markets, bringing together sellers from different areas, often some from out of state. Crate digging at a record swap can lead to really exciting finds or just a lot more of the same old records. But that’s the thing, you won’t know unless you go. The worst thing to do is hear about how awesome it was from someone else. The July 26 RARE Record Swap is coming up next week and here’s just a few things to know if you’re new to the show.

Waking up on a weekend isn’t my thing, but if you want the best chance to see as many records as you can, before everyone else strolls in an hour or so later, be at the doors when the show starts.

Always a good idea if you plan on buying at all. Records in a bag with handles or a shoulder strap are far easier to carry than as a stack under your arm.

The circles of dealers can be consistent or totally unpredictable, but for the RARE Record Swap, a core group of sellers are usually present. Some of these sellers have been doing this for decades and if they don’t always have something you want to buy they may share an interest or be able to find you things. Just talking to them and inquiring a little bit can go a long way, but do it when they’re not swarmed with a dozen people trying to buy stuff.

There is an unspoken rule in the business: cash still is king. Do not expect sellers at a record show to be equipped to handle plastic even though the ever increasing popularity of services like Square make it relatively easy to accept credit or debit card payments. That being said, I have noticed more sellers offering this service so the times may be changing. Two things happen when you pay with cash that might not happen if you go with a card though:

A set amount of cash is also great if you have the tendency to spend too much when given the opportunity, which a room full of thousands of records is. Just leave the plastic at home and bring an amount you’re comfortable with spending.

Once in a while you wind up with a stack of things you don’t want for one reason or another. Maybe they don’t get any playtime so you mine as well find someone that wants to buy it or trade you something else for it. Figure out what the records worth and how much you’ll expect in trade or cash for the album and see if anyones interested. It is important to note that bringing a few records to trade is different then selling. Brining a few things to trade is fine, but a box or more and you need to register as a seller and pay the cost of having a table.

Spotting the big spenders at a swap is easy; they usually have a few people following them around with bags, boxes or dollies full of their purchases. Most of these sales are dealer-to-dealer and those records often show up in local stores a few days later. Pay attention to who buys what.

This tactic can be scaled down and used by anyone to buy more and pay less. The opportunity does not always present itself though, so you have to be able to zero in on a dealer who has a number of things you’re interested in and then present them as a bulk purchase. At that point, the subtle tactics of negotiation take over and you just have to feel out the situation. The line between insulting a dealer and walking away with nothing or scoring a great price is thin and fluctuates from person to person. Be polite and make educated, fair offers.

High-dollar records have a tendency to show up at these events because dealers bring their best finds knowing theres a chance the visibility among possible buyers is higher than at their stores. As with bulk purchase, buying high-dollar records can be a delicate transaction. If you want it, make sure you know what it is, how much it’s worth and if the price difference between your top-dollar and their marked price is too large, it may be best to walk away.

Check out the RARE Record Swap Meet’s website for more information and their Facebook page as well.

This site uses Akismet to reduce spam. Learn how your comment data is processed.