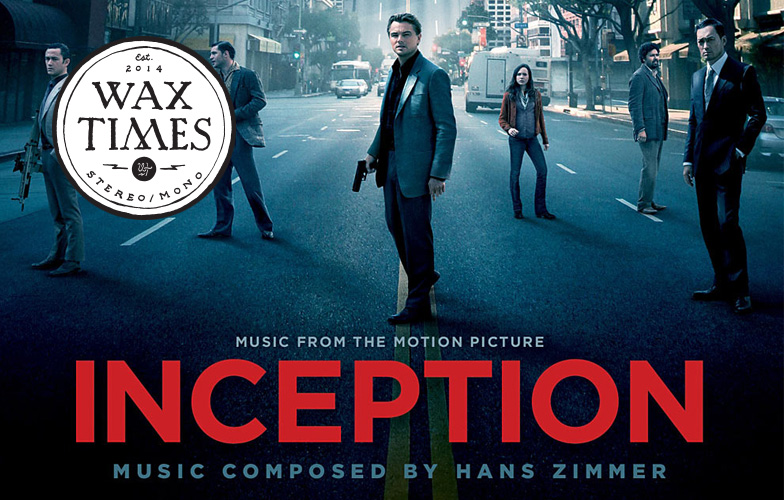 Christopher Nolan’s Inception challenged movie-goers to believe in a dream; but it was more than that. It was a dream within a dream, a series of them actually, all built on top of a corporate espionage plot to infiltrate the psyche of executives in an attempt to force their hand by artificially implanting another persons idea into their subconscious. These dreams affected me as a collector, to the tune of a few hundred dollars for one of the limited edition pressings of the score for the film by Hans Zimmer. It was the single largest disappointment I’ve had as a collector to date.

Two years after the 2010 release of the original disc, prices had soared and sealed copies were netting between $300 and $600 on eBay. Despite the ridiculous costs, the reviews of the pressing, not the music, were horrible. The Discogs release page is still littered with remnants of disparity for those that grabbed an original before they sold out or ponied up big bucks for aftermarket buys like me:

“Did anyone else experience annoying surface noise with this release. I got mine sealed and I assume due to being in a crappy paper sleeve it picked up crackles mostly on the beginning of each side, but also throughout. Wish it was black and heavy vinyl. It looks cool (and sounds great when it’s not a quiet moment with the aforementioned noise).”

“I’m glad it’s not just me who has a terrible noise issue. But still, it’s sad that this has happened to so many people.”

Despite everything I’d read, I couldn’t resist buying into the hype and satisfying my own passion for film music and Zimmer’s score. I got a deal from a Discogs seller for a copy of the original and negotiated the price down from $250 to a more comfortable $200. At the time, it was the single most expensive record I had purchased. Now all that was left was the anticipation of the package being delivered with the coveted disc inside, one of only 1,000 available worldwide. My dream was in limbo awaiting delivery.

Every day I waited and checked the transit status of the package due from a seller somewhere in Idaho and everyday I read more and more details about how disappointed everyone was and continued to be. The box was my dream and I believed in it, I believed that not every pressing could be bad, that the one I purchased was clean and destined to be a part of my collection forever.

Sometime after Christmas of 2012, it arrived, a gift to myself. I opened the box and just sat with the disc for a while deciding on when to play the album. Should I invite people over for a listening party? Should I be selfish and not share the moment with anyone? The unknown was too much of a burden for me and nobody else needed to be a part of the embarrassment of realizing that my $200 purchase would turn into $200 mistake.

It was awful. The lead in groove set the tone for the event, which from start to finish sounded like a campfire not a film score. Hiss, surface noise and every other artifact of a poorly produced disc destroyed the score and experience. The vinyl looked immaculate but something had gone horribly wrong and the worst part was that I knew it was bad before I bought it. But the dream kept me from realizing the truth and that turned out to be a double whammy for me. The only redeeming quality I could find in owning the album was that it quickly became a collector’s item in the truest sense, something to sit on the shelf, not to be played and only to be discussed. But really, who was I kidding, that’s not why I bought it and that’s not why I buy records.

Coming to terms with what’d happened was pretty rough. I became obsessed with the album quickly and took it everywhere I could to see if it was my equipment that was the problem and not the disc. No matter of hi-fi gear or ultrasonic cleansing could rejuvenate this poorly manufactured piece of film score history. It became my totem.

A few years later the novelty wore off. I no longer felt obligated as a collector to keep this unplayable disc in my collection knowing full well that a repress was likely in the works though no formal announcement had been made. Records have been on the upswing for a few years now and it was only a matter of time before I’d truly be stuck with a worthless piece of vinyl so I listed the disc on eBay for $250. All I wanted was my money back so the price needed to be higher than what I paid knowing eBay fees would eat into the bottom line. Somehow, despite the very clear description that warned would-be buyers of the quality issues, it sold for $290 and I was made whole again.

Not but a few months later in April, news started to trickle in about a repress and prices of originals started to tumble as everyone still stuck with one tried to offload their junky copies in hopes of recovering their money as well. Luckily, I’d skirted the hassle of dealing with this situation because I’d just sold my copy a few months previously and though I don’t claim to be a clairvoyant, the coincidence of timing was a surprise and a relief.

So this is the silver lining, the score is once again in print but for how long I’m not sure. The repress sounds good but it’s not perfect in any sense. The album is listenable and unaffected by the problems that ruined the originals but those who are used to the perfectionism of audiophile pressings will find faults here and there. The quiet passages and spaces between tracks have some hiss and on my play copy there was 2 pops during playback, possibly due to the white paper inner sleeves. That’s what you can expect for about $22 but considering the quality and ridiculous prices formerly attributed to the original pressings, it’s hard to complain that much.