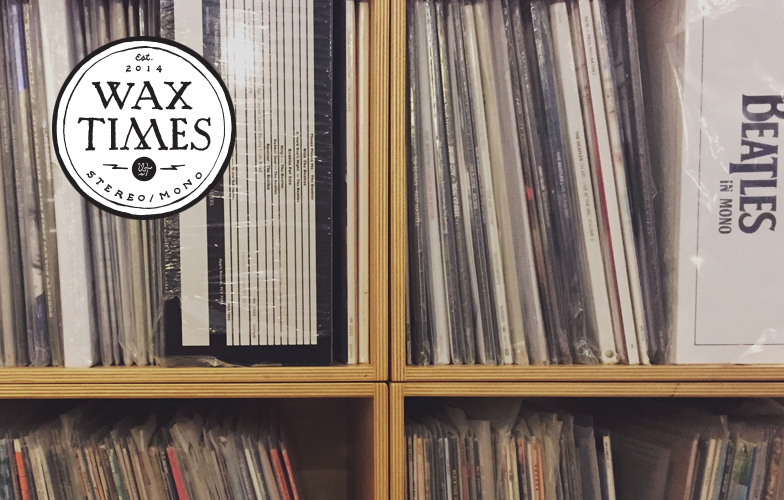 Collecting the Beatles with Jeff Lee

Record collectors are conservators of our own musical histories. We each create a museum for one with limited visiting hours for anyone else. Yet, most collectors are also part of local and online communities where we buy, sell, trade and share our passion for music and vinyl. Wax Times decided we wanted admission to the record rooms of collectors within our community and that’s what we got.

We started this series with local Phoenix collector Jeff Lee. Like all museums, Jeff’s has some special exhibits: Bob Dylan, Frank Zappa, Captain Beefheart and his first love, The Beatles. We recently spent a Saturday afternoon in Jeff’s record room talking about the Fab Four.

Dr. Lee (clinically and professionally uncertified) became a fixture at the local record store I worked nights at for a few years. Revolver Records was on his list of stops to make in search of new discs to add to his widening collection of Beatles albums that had started sometime around 1964. Our friendship was fairly immediate despite my lack of in-depth Beatle knowledge because his personality was well left of center and our conversations were more akin to those overheard at dive bars than at record stores.

Jeff’s a guy that can size up your records without much effort and decide quickly if he’s interested in purchasing anything or merely just window shopping. Over time, Jeff shared more with me than most collectors I’ve met. He’s not your typical curmudgeon; afraid to let go of the valuable information and secrets of the record world gathered through his decades in buying, trading and selling. Jeff will actually discuss anything with you and point out everything if you show interest and ask questions. So I did, every time he came to shop. 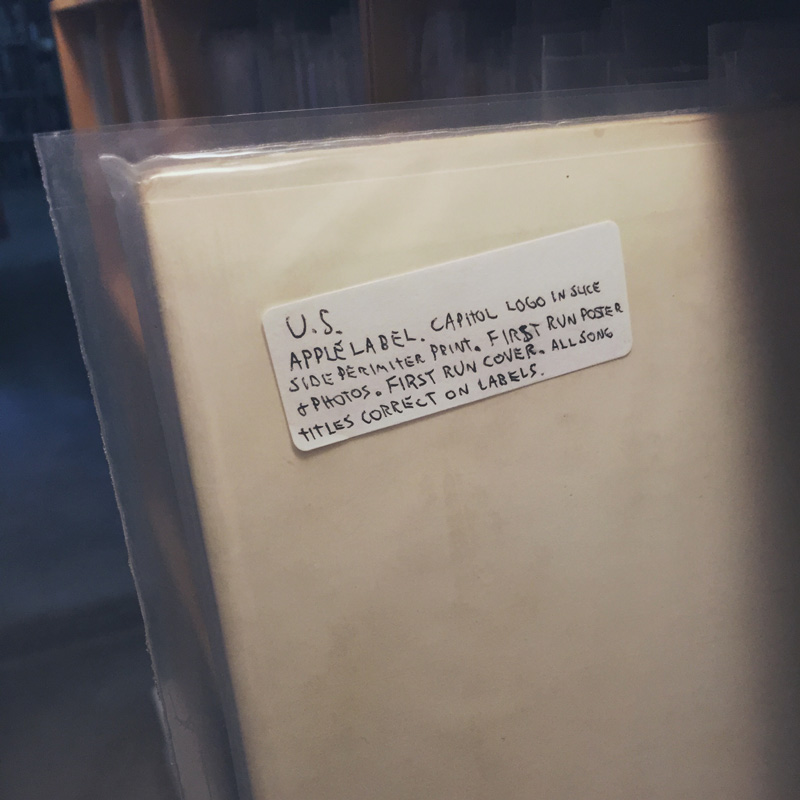 Everyone seemed to know that Introducing the Beatles was one of, if not, the most counterfeited record of all time except for me. I really just never cared to shore up on this stuff because the experts where out there, like Jeff, and they spent their lives becoming expert Beatle collectors, and that’s not what I wanted. For me, the polarity in his obsession compared to my casual interest was why we got along and how we were able to build a friendship. After discussing the reasons behind Veejay Record’s demise, along with all the finer points about the label before it crumbled due to poor management, the conversations shifted and Jeff asked me questions. He asked me what I listened to, enjoyed, collected and sometimes bought a record I suggested — well, I think that happened at least once.

More time passed and a secondary connection was made. The RARE Record Show, or swap, at the local Italian American Club happened to be another of Dr. Lee’s hangouts being that it was only every other month on a Saturday morning. My first time leaving the show was with an armful of albums, and I still go because even leaving with nothing means you get to talk to people like Jeff and the rest of the local vinyl community. Going to the show quickly became about more than buying records.

Six years later, and roughly a year after Wax Times was launched, Jeff agreed to an interview, and when I showed up to his home with Dan Hull, Wax Times’ editor, Jeff’s collection became more than just a discussion it became a reality. 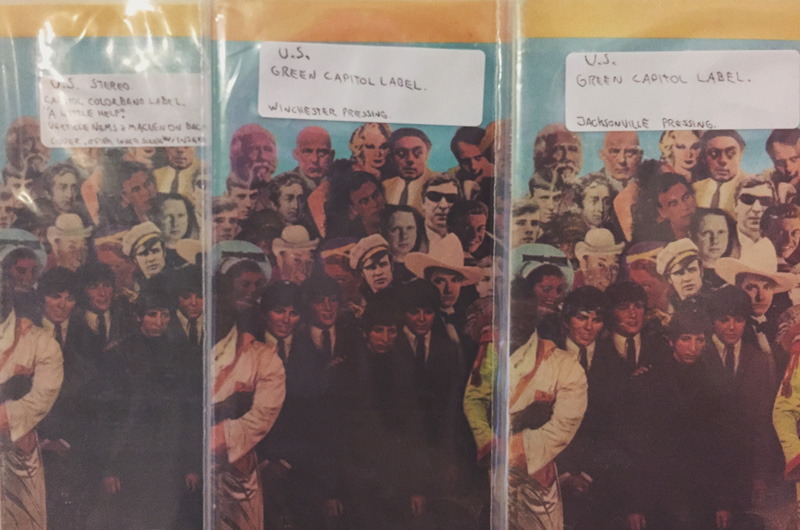 The living room is wall-to-wall record shelves, bookshelves with original artwork above his Linn turntable and a listening chair strategically placed between his speakers and equipment rack. One entire wall of his collection is dedicated to the letter Beatle. Jeff’s collection is in the thousands and covers all musical bases but clearly, for him, home plate is The Beatles.

“I think my first Beatles record was Hard Day’s Night back in 1964. It was given to me for my Birthday when I was a little kid. Back then I couldn’t just buy records. I had to rely on grownups to buy them for me.”

The soundtrack of his childhood was one band: “You couldn’t get away from them back then. Their music was everywhere.”

Lee has one of those collections that contain twenty or more versions of every official album, both the Capital and Parlophone pressings as well as a variety of other editions sometimes for no other reason than just to be able to check it off the bucket list. 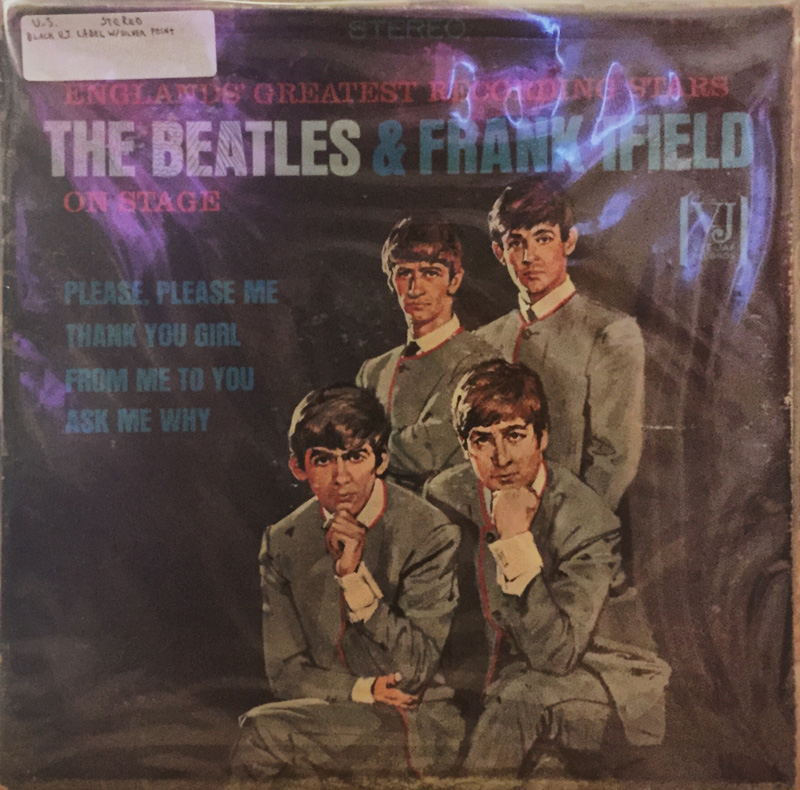 We’re talking all colors of the Capitol Rainbow and everything in between: 1965’s The Beatles vs. The Four Seasons, check; The Beatles and Frank Ifield on Stage, yup. This album is a rarity of the obscene variety, one that requires a patience measured in years to acquire. Without too much indication of how many actually were produced or are in existence today, the bootleg with Frank Ifield was a more recent acquisition found at the RARE show for no small sum.

But he’s an educated collector who’s well read and knows the subtleties of each pressing:

“I didn’t intently buy 20 copies or more [of each Beatles record]. It just happened. I would see a variation at a reasonable price that I didn’t have yet so I bought it.”

Jeff’s long and winding road of Beatles collecting just keeps going. Boxes of Beatles 45’s are followed by Beatles Christmas records. All the solo output by each Beatle moves into to shelves of albums by other musicians that featured involvement of one or more Beatle during production.

Lee pulled out a copy of Kinky Friedman’s 1976 record Lasso From El Paso purchased because Ringo Starr is credited for singing backing vocals on the track “Men’s Room, L.A.” Dan was familiar with this album. The first track, “Solid American,” was recorded live when Friedman opened for Bob Dylan’s Rolling Thunder Revue Tour, but the Beatles connection went unnoticed until Jeff pointed it out.

Buying a Kinky Friedman album because Ringo Starr sang backup on a track is a pretty high level of commitment to a band for a man that doesn’t consider himself a Beatles collector. Lee has a sense of humor about it though, referring to his hobby of acquiring all variations of their albums “Beatles wanking.”

To Jeff, being a Beatles fan means he’s all in. “I’m a fan through the good and the bad.” And if one of the Beatles is connected to a music project, Jeff is going to get it.

“In the late 80’s CD’s actually saved me. I’m a vinyl collector and if a Beatle was connected to an album that only came out on CD I felt I was off the hook. But now, some of those CD’s are being reissued on vinyl for the first time so it looks like I might have to break down and get them.” Even 45 years after the break up, Jeff enjoys keeping up with their solo projects. “I really liked Ringo’s latest, Postcards From Paradise.” 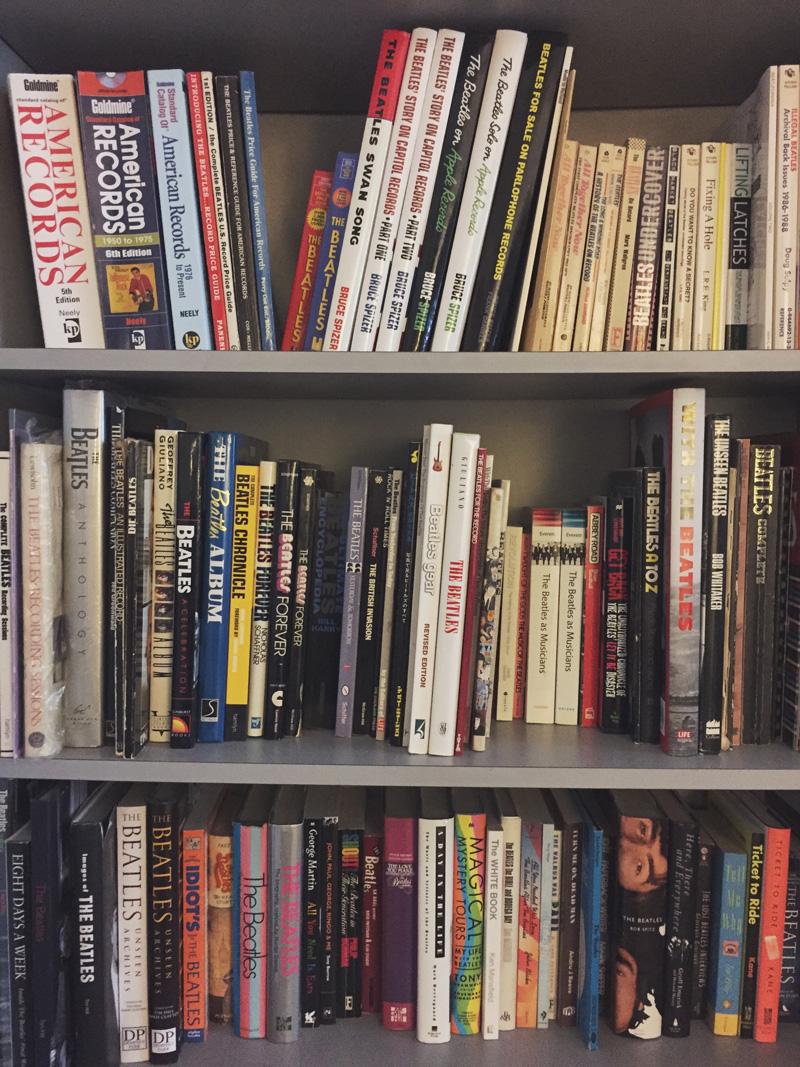 After a few hours, we had just scratched the surface and by surface, we managed to only cover the letter B. I asked Jeff if he had any advice for new collectors who are looking to buy Beatles vinyl. He suggested looking for copies of Capital purple label pressings.

“The purple labels are a great place to start. They sound good and you can find them clean for reasonable prices.”

When asked what he felt was the best sounding pressings of the official Beatles albums, without hesitation he said the 1982 Mobile Fidelity Sound Lab Beatles box set, The Collection. “Although all the individual 80’s MFSL Beatles record represses are great too. I have those as well.”

collecting interview
Previous post:
4 sites every record collector should know Next Post:
A record brush for every collector