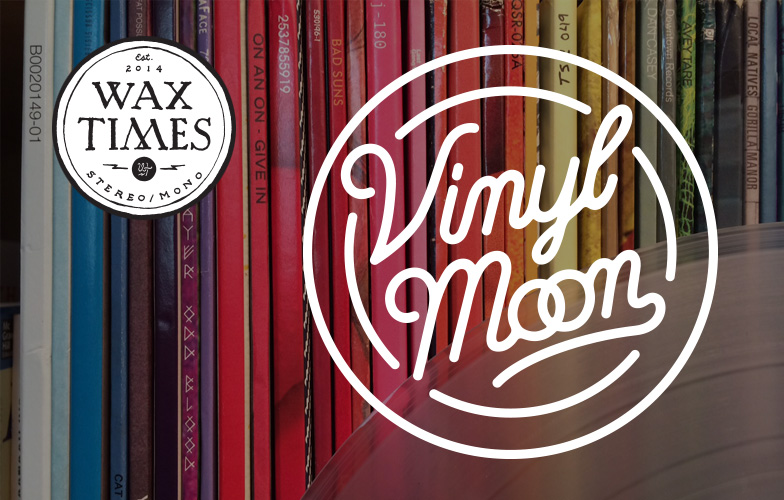 Get new music in your mailbox with Vinyl Moon

Vinyl Moon nears it’s funding threshold on Kickstarter thanks to a fanbase excited to sign-up for compilation albums featuring unique artwork, packaging and tracks from bands that are looking to gain exposure. The mixtape record club plans on releasing one album a month, delivered to you anywhere in the world and is backed by The Burning Ear who’s successful promotion of emerging artists has elevated a number of otherwise underexposed musicians to a broader audience. Some are still wondering why we need another vinyl club and if you aren’t sure either, Brandon Bogajewicz, founder of Vinyl Moon and The Burning Ear, is here to convince you.

The basic ideas behind Vinyl Moon are enticing and include a no-commitment price tag of ~$25/month for a unique album of ~10 songs on limited edition vinyl with artwork from acclaimed artists in meticulously designed packaging. From the tracks to production, Brandon has assembled a team of experts to develop and create an experience he believes will help you discover new music. Here’s how it all breaks down from costs to royalties and why Vinyl Moon will succeed.

Q – It seems like an unlikely venture to gamble on people enjoying a surprise of unfamiliar music but that’s exactly what you’re doing. Has it been a struggle to sell people on the idea?

I am someone who wants to take a very active role in my new music discovery, however, many people enjoy a passive discovery process. That is why radio is successful.

Some people balk at the idea of a record club where music is selected for them and I completely understand. To use a culinary analogy, it is like going out to eat; most people enjoy not having to think about it and go out to eat because it’s relaxing, I on the other hand, enjoy the cooking.

Q – What do the artists get in return?

The artists chosen for Vinyl Moon are all strong enough to find success on their own but in the era of online music over-saturation, any advantage is helpful. Most uniquely, the bands featured on Vinyl Moon get exposure to a dedicated community of music fans who believe in paying for music. On top of that, every band gets extra exposure on The Burning Ear via features, interviews, and coverage that puts them in front of thousands of more listening ears each month. A key goal of Vinyl Moon is to help these new artists gain more exposure so that when they eventually release a full EP or album they will have an audience anticipating the release.

Vinyl Moon takes no rights from the artists. Bands involved keep 100% of their rights and any revenue generated after being featured.

Q – What kind of costs does this project incur and how are those reflected in the price?

It is expensive to properly make records. Even more so with the premium art elements involved with Vinyl Moon. The major costs break down to:

Q – As smaller labels and newer artists become more vocal about their inability to gain traction in a saturated market, Vinyl Moon seems like an attempt to bridge that gap. Right?

Certainly! The internet fuels new music disposability. Vinyl Moon hopes to return some stability to new music and build true fans again. The great thing about the vinyl community is that it respects artists and musicians. We buy records! We pay for music! For a new band, making a fan in the vinyl community can be a lot more valuable then someone who only wants to stream their music until the next flavor of the week comes along.

Q – Some critics are complaining about the trendiness of vinyl clubs. Why should collectors fund this?

For collectors that back Vinyl Moon, I see it as an investment in an active (and interactive) listening experience. Collectors should join Vinyl Moon if they have an interest in new music, specifically indie genres like chillwave, indie rock, dance, alt-pop, etc. Vinyl Moon finds bands at their earliest stages, meaning we will be the first appearance on vinyl for many of them. Initial vinyl appearances and debut tacks are an appeal for most any collector. Combine that with top tier pressing quality and you have something worth taking care of.

Q – The genres represented in the campaign show a focus on indie-rock, alt-pop, dance and chillwave but give lesser billing to genres like folk, hip-hop, metal and classical. Are these choices based on the availability of licensable music or personal taste?

Personal taste is the only barometer I have ever used to suggest music. I recommend what I love and I can only hope that someone who is diehard about other genres will start another mixtape vinyl club for the many other genres of music out there.

Q – Are there any plans to include a voting aspect to what types of tracks make it onto each album?

Voting always breeds competition and disappointment as well as favoring bigger bands. It isn’t a format that excites me at the moment. By having a centralized selection process I am able to put tiny bands on equal footing as better known ones. But as Vinyl Moon grows there are so many possibilities and I could totally envision a voting fueled 7″ club or annual edition, etc. I certainly want to engage with fans and their discoveries as well.

After talking with Brandon about Vinyl Moon and his philosophy of music discovery, the goal sits within reach. With thirteen days remaining in the campaign and funding roughly $500 away from the goal, the project is poised to take listeners on a journey of music discovery with a bit of a twist. For more info and to back Vinyl Moon, check out the kickstarter page.

All images courtesy of Vinyl Moon